You Are Here: EUV Interference Lithography 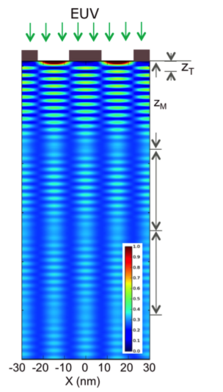 At the end of the XXth century, one of the promising lithography technologies was the proximity lithography using hard X-rays. With this short wavelength, the influence of the diffraction limit on the resolution is negligible and high-resolution patterning is possible. Further reduction of the structure under this wavelength was found to be ineffective due to increased photoelectron blur in photoresist. Due to these challenges and rapid development of the immersion lithography, this technology has not progressed past the pre-production state. The next step in history of the optical lithography is a radical reduction of the wavelength from current 193 nm to 13.5 nm, which should enable the possibility of scaling below 10 nm half-pitch levels. This radiation lies in the so-called extreme ultraviolet (EUV) wavelength range, where photon energy is significantly higher and, as a consequence, the interaction mechanisms between light and matter differ from well-studied ultraviolet radiation.


During the last decade, a number of interference schemes were investigated including Lloyd mirror, single grating and double grating schemes. However all of them have rather high requirements on spatial and/or temporal coherence, making them very inefficient for use with available high power laboratory sources. Recently it is shown that it is possible to improve the resolution of the proximity printing by utilizing the Fresnel diffraction of the short wavelength radiation on the nanostructures. This allows achieving sub-30 nm resolution with mask-to-wafer gap reaching 30 µm, which is much more realistic to maintain in an industrial environment [Brose, Danylyuk at al.].


We are interested in the feasibility the interference lithography technology that can overcome the resolution limit as well as a rigorous approach for the interference lithography by Talbot effect under EUV radiation. The EUV lithography setup is utilizing the high quality EUV source in collaboration with Fraunhofer institute for laser technology. The radiation at 10.9 nm with 3 % bandwidth, which is generated by a Xe gas discharge produced plasma (DPP) has been used [Bergmann et al.]. This work is especially suited for high-performance manufacturing of sub-µm sized arrays in focusing on applications such as optical nano-antennas, biosensors, optical storage, nanolithography, etc.