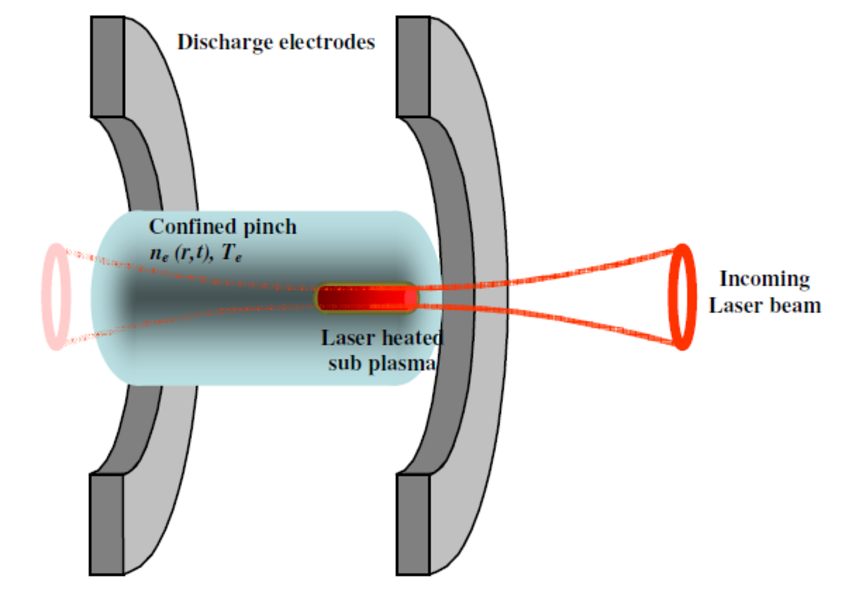 The Hybright approach is a combination of discharge- and laser-produced plasma techniques, aiming for the creation of high brightness extreme ultraviolet (EUV) light sources.

In many applications, e.g. microscopy, the brilliance (emitted power per solid angle and area of emitting surface) is the limiting factor to the achievable resolution and required time per measurement. The emitted power scales with the conversion efficiency and the emitting surface of the source. In a real optical system for an incoherent source of finite extension the collectable amount of light is limited by the geometry of the lightpath and is higher for small etendue sources (in this case smaller plasma volume and higher photon density).

Highly brilliant and coherent light sources for XUV such as extreme ultraviolet lasers (XRLs) and synchrotrons are enormously expensive, complicated to maintain and not suitable for small laboratory applications. As far as coherence is not a mandatory property for the application, Discharge Produced Plasma (DPP) and Laser Produced Plasma (LPP) are the commonly used methods and are both known as intense emitters of EUV radiation.

However, they either do not match etendue and radiance requirements for metrology applications or are too complex, very inefficient and over dimensioned in size and price. By using a hybrid approach of combining both techniques, drawbacks of each solution can be overcome. In this so called laser heated discharge plasma (LHDP) approach a Z-pinch plasma is electrically generated and optically heated. This is aiming at the generation of highly brilliant incoherent EUV radiation with minimum required laser pulse energy and discharge currents. To achieve this the discharge of a triggered hollow cathode source produces and confines a “cold” and dense plasma which is used as a target for a pulsed Nd:YAG laser beam. The optical heating of the plasma partially restores the energy, which is lost due to the EUV emission. Thereby the time EUV radiation is emitted is elongated and the collapse due to energy losses can be delayed. Furthermore only the center of the pinch plasma is heated by the laser beam, since the size of the optically heated area is much smaller than the plasma pinch diameter. This leads to a further confinement of the plasma, which results in a reduced etendue of the EUV emission.